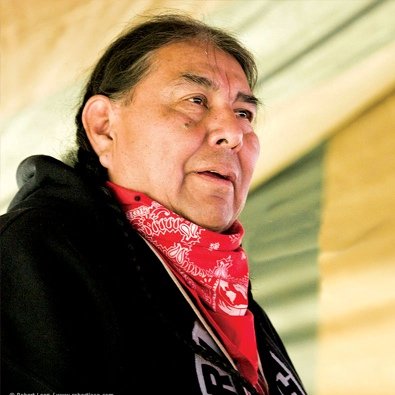 A Diné (Navajo) of the Dibé izhiní clan on his mother’s side, Tom is Dakota Bdewakantonwan Hunka from Minnesota. His ceremonial Dakota name is Mato Awanyankapi (The Bears Look Over Him). A Sundance ceremonial leader, he is the Executive Director of the Indigenous Environmental Network, working for the rights of Indigenous Peoples, rights of Mother Earth and for environmental and economic justice. Tom has networked with Indigenous Peoples and spiritual/religious leaders globally helping humanity to re-evaluate their relationship to the sacredness of Grandmother — Mother Earth.

As Executive Director of the Indigenous Environmental Network, Tom Goldtooth has built an organization of 250 Indigenous communities focused on climate justice, energy, toxics, water, globalization and trade, and sustainable development. A prominent spokesman on environmental justice issues, he was honored in 2010 by the Sierra Club and the NAACP as a “Green Hero of Color.” He co-produced an award winning documentary film, Drumbeat For Mother Earth, which details the effects of bio-accumulative chemicals on Indigenous communities.

Goldtooth has guided the growth of the Indigenous Environmental Network from a national to a continental to a global alliance. He has represented the rights of native peoples at the international level through UN treaty making bodies and conventions on persistent organic pollutants, global warming, biodiversity protection, mineral extraction, and water resources.

Goldtooth speaks on environmental justice, especially with regard to the Indigenous peoples of the world, both as injured parties and as sources of corrective wisdom for the planet’s ecological dilemmas.